Großer Hexenkopf mountain (3.313 m) is a summit in the Eichham group situated southeast of the Großvenediger mountain in the national park Hohe Tauern. The specimen offered below stem from a big cleft in its north face, which can be reached most conveniently from Prägraten a. G. (Virgental) via Timmeltal and Kleinitzalpe. The cleft is situated in an altitude of nearly 3.300 m and can only be accessed by climbing exposed terrain. The cleft was found and worked already in 1980, i.e. before the national park legislation set a strict prohibition of mineral collecting for Osttirol (East Tyrol). The cleft paragenesis comprises rock crystals of good luster and clarity with turquois schist inclusions, calcite, minor titanite and some copper mineralisation in the surrounding quartz vein (see picture below). The latter is a smoking gun for the entire locale, compare e.g. the renowned find of bornite crystals in the nearby Firschnitzscharte. 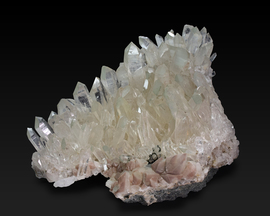 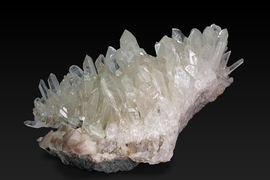 One of the very best specimen of the find and a major piece for entire Osttirol. A rich group of lustrous rock crystals with turquois schist inclusions on selected rhomb faces on green shist matrix. Some calcite scalenohedra complement the picture. The largest rock crystal measures about 10 cm. 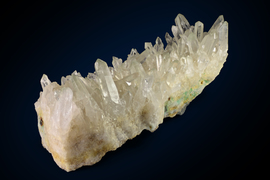 Rock crystals of great luster and clarity measuring up to 7 cm. Some crystals exhibit bipyramidal and trapezoidal faces. There are some contacts along the periphery, but the whole interior is basically undamaged except for one small crystal with healed rupture. 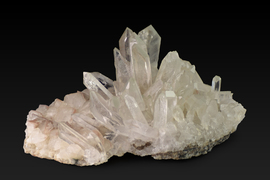 Group of rock crystals accompanied by white-reddish, dull calcite scalenohedra. The rock crystals measure up to 6 cm. There are some minor ruptures along the periphery and rehealed contacts on two tips. 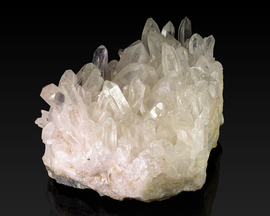 Clear and lustrous rock crystals with some turquois shist inclusions on a massy piece of quartz matrix. The crystals measure up to 7 cm with 2.5 cm diameter. The specimen only has some ruptures along the periphery.